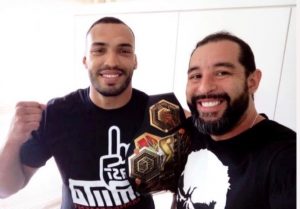 champion, Bruno Silva, summed up the title bout with Artyom Frolov, discussed the likely prospects in the light heavyweight category, and the opportunity to debut in the UFC title M-1

«Artyom Frolov was a real champion, it was a great fight, he is a really strong guy, but I won the title and am very pleased to have become a champion,» said the Brazilian in the post-match interview. «The most important thing is that I became a world champion, having won by knockout, because I am a real striker»

“I don’t see any problems in the future to play in the light heavyweight category, because before that I had fought in weight up to 93 kg, but in 84 kg I feel much better, so now I would like to play in this division”

Any cookies that may not be particularly necessary for the website to function and is used specifically to collect user personal data via analytics, ads, other embedded contents are termed as non-necessary cookies. It is mandatory to procure user consent prior to running these cookies on your website.